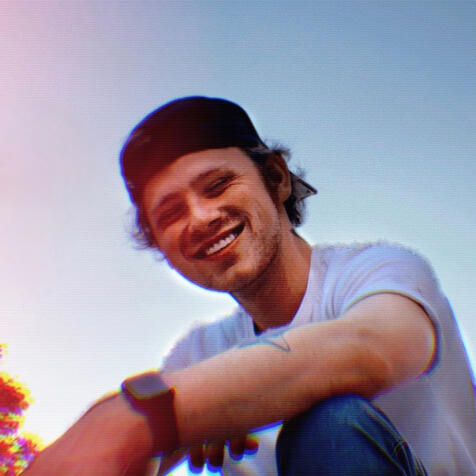 With a history of creating out-of-the-box ideas - including recent industry-shifting highlights like the viral 3D sound youtube experience 'The Tucker Zone', interactive instagram adventure ‘Lost Boy’, and an experiential website where you can 'calculate an estimate of the number human you are to ever be born' (MyLifeNumber.com) - it’s no surprise John Tucker has established a global presence as an innovator by expressing his unique perspective on the world.

With a present 200,000+ followers accumulated across his personal social media & rapidly growing content engagement (14 million+ views & 250,000+ TikTok reaction videos on the aforementioned ‘Tucker Zone’ alone) - in addition to his extensive reach on the viral instagram page @VinesBeLike (500,000+ followers) which he built & grew - John has consistently proven his ability to identify cultural trends & integrate his unprecedented creativity in order to craft ideas that share & expand perspectives - an asset recognized & utilized through his work with innovative organizations like Disney’s Digital Network & Meow Wolf.

With a future ahead filled with consuming, conceiving, & creating more for the world (now supported by his own platform - The Experience Zone - an experiential production house he founded just this year) John Tucker’s ultimate focus remains to experience all life has to offer, & along the way, leave a positive dent on it through expressing the experiences he envisions.

Entering the world with a seemingly natural abundance of curiosity, John Tucker became active in the entertainment industry at the age of just 9 as an actor in various film & stage productions, which continued throughout his pre-teen years.

As the foundations of his ambitions became clearer, he shifted his focus to a different kind of performance art- illusions. His teen years were filled creating magic content on YouTube, performing live at local events, & attaining internships with the world’s leading industry events- all of which allowed him to continue exploring his interests while building an important base for years to come.

As his resume grew, his ideas continued to expand. More & more, he found himself less interested in focusing on the deception of traditional magic performance & more drawn to the magical experience it created in people's minds. He decided to focus on this 'experience' - a brand new form of entertainment - sometimes using deception as a tool, but not as the main focus. Inspired by predecessors of these 'experiences' (like the extraordinary feeling Disney World rides provided), sticky notes of ideas filled his bedroom walls, and, encouraged by similiarly-minded innovators (like Steve Jobs, who combined both abstract & logic), he established an ultimate goal- Change The World.

By 2014, at age 17, he had created his first self-produced 'experience' at the historic Cotton Bowl Stadium, testing out this new form of entertainment while supporting a charitable cause that tied in. With support from networks like NBC, the event (in which an illusion was successfully created that a CD locked in a plexiglass box held a predictive recording of the outcome of that year's Super Bowl) led to new opportunities to expand onto more performances/creations for worldwide events like The Color Run.

Continuing this exciting progress into 2015, John created a series of short 'experience' videos which went viral on Instagram. Recognizing the new power social media held, his entrepreneurial side kicked in & he built a page to distribute viral content - @VinesBeLike - on Instagram. Utilizing his unique combination of both creative & effective thinking, John grew @VinesBeLike to 500,000+ followers in just under 6 months.

This extreme success brought new ventures with it- & by 2016, he was working independently on marketing campaigns for #1 Apps (i.e. 'Game Of War', 'Avengers' etc.) & more- gaining strong knowledge of the corporate background mechanics while fundamentally learning what made a brand integration truly effective.

Meanwhile, his eyes were still wide on creating 'experiences'- & as various independent ideas continued piling up (migrating from sticky notes on walls to lifetimes worth of digital notes) so did a new frustration to gain resources to make them reality. After 2 years of attempting to secure investments for his debut 'experiences' project, John released 3 creations publicly in 2017- a 'mixtape' of sorts- rough demonstrations of his intent organized as a triplet of ideas appropriately titled ‘Now Let Me Create’. It included 'The Tucker Zone' (a 3D Sound Experience), 'Lost Boy' (an interactive 'choose-your-own-adventure' on Instagram), and 'Live X' (a lifestyle brand with ambitions to be a deep cultural movement). These projects caught the attention of 'Meow Wolf' - a rapidly growing startup on a similar train of thought, whose physical immersive exhibits has been attaining a growing level of success. John joined the team in 2018, resulting in public facing projects (like multiple SXSW experiential activations) while fundamentally continuing to define & form a base for a corporate 'experience' industry.

Slowly but simultaneously, ‘The Tucker Zone’ also began gaining intense traction- reaching 1 Million views before the year concluded. With a sense of newly obtained independent momentum, John decided to begin planning the next iteration of his story- Phase 2.

As 2019 drew to a close, John began his plan to publicly reveal his vision of Experiences- this time with an audience to actually witness. After releasing a follow up to 'The Tucker Zone', his online growth reignited exponentially. The following months, leading into 2020, he continued posted more unique experiences on his YouTube platform- including a choose-your-own-adventure 3D Sound game & 'My Life Number', a website to discover an estimate of 'what number human you are to ever be born' - his audience growing by the tens of thousands with every release.

At present day, the original 'Tucker Zone' continues casting a wide net (now sitting at 14 million+ views & reaching over a million more monthly)- only seating more consumers for what is sure to be an out-of-the-box show. An unprecedented wave of cultural excitement for immersive audio has emerged- & In 2020, John established the world's first experiential production house- The Experience Zone - to take grasp of the new leadership position he's found himself in.

Having only just dipped his paintbrush in preparation to paint the mission he's consistently envisioned throughout it all, John's goal has matured but remains fundamentally the same- to experience the universe he's in & simultaneously leave a positive dent which will no doubt, by the end of this story, show he was here.